CFOs Pressured with Too Many Demands, So Little Time 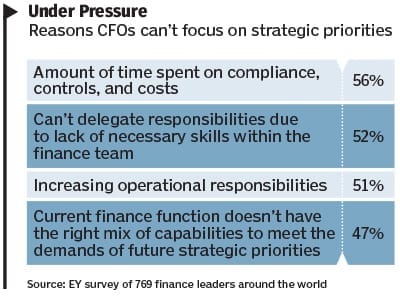 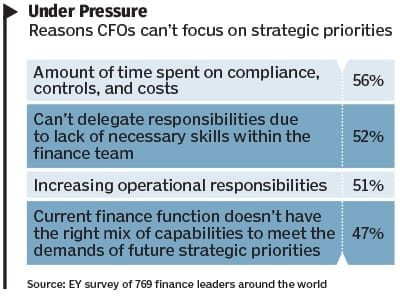 And there won’t be any rest for the weary going forward:

“People are struggling, and they’re also fatigued at this point,” says Klimas. “They’ve been through a lot. In the 1990s they put in ERPs. Then they prepared for Y2K. The dot-com bubble burst, and then came a period of [heightened regulatory activity], followed by the worst recession in 80 years. And it’s not going to end. The complexity of the job will continue to accelerate. The CFO’s job is to figure out how to deal with that.”

So, how does one deal with that? “You’d better know your strengths and weaknesses, and you’d better put people in key roles who complement you,” Klimas says.

But surely that’s easier said than done, with the talent pool in companies’ middle management ranks thinner than it used to be. One reason for that is demographic: baby boomers are retiring, Generation X is less populous than its predecessor, and millennials for the most part are not ready to step up.

The talent gap is especially vexing given the proliferation of digital technologies and increased use of advanced data analytics. “These technologies are disrupting business models,” Klimas says, “and CFOs are being asked not only to understand how to leverage them within the finance function but also to think strategically about the impact on the business and the industry it’s in, and to help the CEO navigate through it.”

Among survey respondents who said they need to build their understanding of digital and smart technologies as well as sophisticated data analytics, the greatest share, 34%, said driving growth is their top objective for the next five years. By comparison, 25% said orchestrating organizational transformation is the top objective, while 23% pointed to driving cost efficiency and 19% to managing strategic risk.

“Digital offers enormous opportunities for organizations to enter new markets, transform existing products, and introduce new business and delivery models,” EY said in its survey report. “Finance leaders who are focused on growth seem to be embracing digital faster than the rest.”

Yet, the report notes, many organizations have been disappointed with the results of steep investments in technology to mine and manage data.

“It’s very easy to fall into the trap of using technology for technology’s sake,” says Klimas. “There’s buyer’s remorse where people didn’t think fully about the value proposition before making investments in a hot new technology to help them with their data. It can look cool and interesting but not really provide much value. Thinking strategically how to leverage data and what value it will enable, and being very systemic in how you approach that, creates more hard work but usually leads to a better result.”