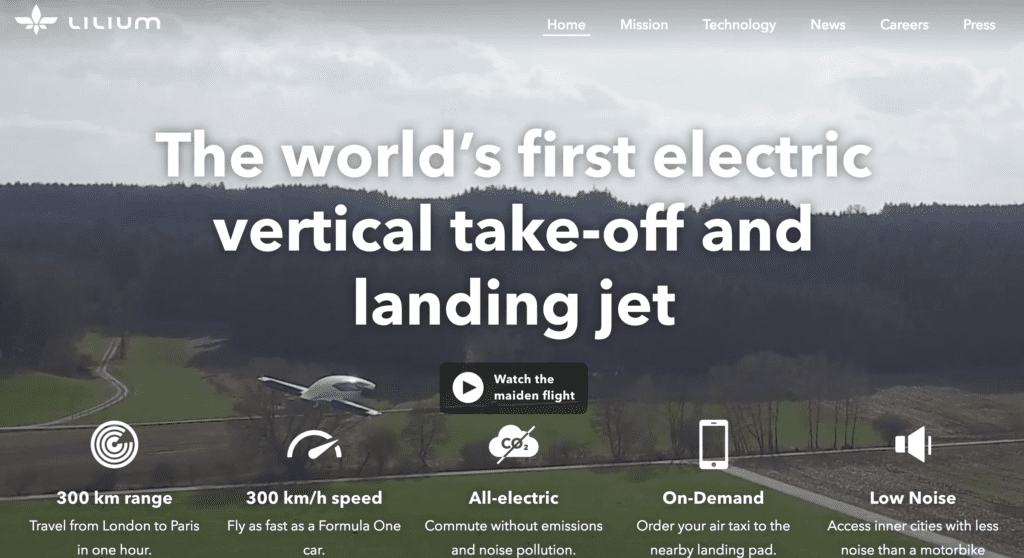 Citation from their press release:

The craft is powered by 36 separate jet engines mounted on its 10-meter long wings via 12 movable flaps. At take-off, the flaps are pointed downwards to provide vertical lift. And once airborne, the flaps gradually tilt into a horizontal position, providing forward thrust.

During the tests, the jet was piloted remotely, but its operators say their first manned flight is close-at-hand. And Lilium claims that its electric battery “consumes around 90 percent less energy than drone-style aircraft,” enabling the aircraft to achieve a range of 300 kilometers (183 miles) with a maximum cruising speed of 300 kph (183 mph).

In many ways, electric-powered aviation is still in its infancy. Electric cars with thousand-pound batteries generally max out at 300 miles per charge. The most sophisticated electric aircraft today can barely muster an hour aloft at 99 mph — and that’s without vertical take-off and landing. But Patrick Nathen, co-founder of Lilium Jet and the startup’s head of calculation and design, said their battery technology will get the job done.

“It’s the same battery that you can find in any Tesla,” Nathen told The Verge. “The concept is that we are lifting with our wings as soon as we progress into the air with velocity, which makes our airplane very efficient. Compared to other flights, we have extremely low power consumption.”

Safety is a major emphasis at Lilium, Nathen added. While the startup is working toward having its aircraft piloted autonomously, it intends to use human pilots in the meantime. There will be parachutes on board, and something called the “Flight Envelope Protection System” will prevents the pilot from performing maneuvers or flying the aircraft beyond safe flight parameters.

The plan is to eventually build a 5-passenger version of the jet. So anyone who dreams of a minivan version of the Jetsons’ flying car, this craft is for you. And naturally, Lilium envisions its aircraft used in dense, urban areas in an on-demand capacity. Pull out your smartphone, book a seat, and make your way to the nearest launchpad, which can be found at street level or on a nearby rooftop. Like Uber, but for flying cars (even though Uber is already working on its own version).

And before you dismiss this as another luxury mode of transportation for the super-rich, Nathen insists the goal is to get the cost low enough so everyone can use it. A 55-minute taxi ride from Midtown Manhattan to JFK airport, with a fare of $55, becomes a breezy 5 minute flight in a Lilium jet, for as low as $6.

If it seems fantastical, it’s probably because it is. Flying cars, of course, are ridiculous. Wild-eyed inventors have been pursuing the idea for decades, with little to show for it. Many have gone broke, and some have died, trying to turn their fever dreams into reality. The fact that flying cars act as a stand-in for some distant, unattainable future isn’t a mistake. There are many things about flying cars that make them impractical, unworkable, and even wrongheaded. The problem is that these aircraft don’t solve any problems for normal human beings, nor do they even gesture toward a meaningful impact in the distant future.

But that hasn’t stopped many from trying. And with better materials, autonomous navigation systems, and other technical advances, dozens of well-heeled investors are convinced that we’re on the cusp of seeing flying cars — or at least small, electric, autonomously flown commuter planes — take to the skies.

“We are right now at the magical point,” Nathen said. “We have without a doubt started at the perfect time… This is why you can see a lot of different projects from all over the world.”